Lately, I’ve been making the effort to turn off Netflix and pick up a book instead. I’m a pretty avid reader, so it’s really not that hard, but when I’m binge-watching a show, sometimes it can be hard to pull myself away!

It’s been a hot minute since I’ve shared a book review post, so I”m glad to finally FINALLY be back on it! Since we’re in self-isolation it’s the perfect time to tackle some great reads! (Make sure you check out my past reviews for even more book recommendations!)

Abbie awakens in a daze with no memory of who she is or how she landed in this unsettling condition. The man by her side claims to be her husband. He’s a titan of the tech world, the founder of one of Silicon Valley’s most innovative start-ups. He tells Abbie that she is a gifted artist, an avid surfer, a loving mother to their young son, and the perfect wife. He says she had a terrible accident five years ago and that, through a huge technological breakthrough, she has been brought back from the abyss.

She is a miracle of science.

But as Abbie pieces together memories of her marriage, she begins to question her husband’s motives—and his version of events. Can she trust him when he says he wants them to be together forever? And what really happened to her, half a decade ago?

Beware the man who calls you . . .THE PERFECT WIFE

MY REVIEW: LOVED this one! Twists at both the beginning AND end? I’m sold. Abbie wakes up in the hospital with no memory of how she got there and realizes she has been in a terrible accident… that happened 5 years ago. As she works through her memories and tries to figure out the truth behind her accident, tries to reconnect with her autistic son who barely remembers her and questions her husband’s motives, I was totally on the edge of my seat waiting to see how it was all going to end. Let me tell you– I thought I saw the twist that was coming, but the ending I had “figured out” was totally wrong and the REAL twist was nothing I could’ve imagined! If you’re a fan of JP Delaney, this one is a can’t miss. The protagonist is truly unlike any I’ve come across in any recent thrillers!

In this perfectly-paced new novel from Sara Shepard, the number one New York Times best-selling author of Pretty Little Liars, the women of a tight-knit college town learn through gossip, scandal, betrayal, and even murder who their neighbors and husbands really are.

Aldrich University is rocked to its core when a hacker dumps 40,000 people’s e-mails – the entire faculty, staff, students, alums – onto an easily searchable database. Rumors and affairs immediately leak, but things turn explosive when Kit Manning’s handsome husband, Dr. Greg Strasser, is found murdered. Kit’s sister, Willa, returns for the funeral, setting foot in a hometown she fled 15 years ago, after a night she wishes she could forget. As an investigative reporter, Willa knows something isn’t right about the night Greg was killed, and she’s determined to find the truth. What she doesn’t expect is that everyone has something to hide. And with a killer on the loose, Willa and Kit must figure out who killed Greg before someone else is murdered.

MY REVIEW: The author of Pretty Little Liars is back with a standalone adult novel, Reputation. Told from multiple viewpoints, the story is all about scandal, intrigue and how far people will go to conceal their darkest secrets. When an unknown hacker posts a database of staff, student and faculty emails at prestigious Aldrich University, The premise definitely made me think– what would you do if all of your private emails and correspondence were suddenly out there for everyone to see?

She Lies in Wait – Gytha Lodge

On a scorching July night in 1983, a group of teenagers goes camping in the forest. Bright and brilliant, they are destined for great things, and the youngest of the group – Aurora Jackson – is delighted to be allowed to tag along. The evening starts like any other – they drink, they dance, they fight, they kiss. Some of them slip off into the woods in pairs, others are left jealous and heartbroken. But by morning, Aurora has disappeared. Her friends claim she was safe the last time they saw her, right before she went to sleep. An exhaustive investigation is launched, but no trace of the teenager is ever found.

Thirty years later, Aurora’s body is unearthed in a hideaway that only the six friends knew about, and Jonah Sheens is put in charge of solving the long-cold case. Back in 1983, as a young cop in their small town, he had known the teenagers – including Aurora – personally, even before taking part in the search. Now, he’s determined to finally get to the truth of what happened that night. Sheens’s investigation brings the members of the camping party back to the forest, where they will be confronted once again with the events that left one of them dead and all of them profoundly changed forever.

MY REVIEW: Lodge’s debut novel was a great read. Told in dual timelines of past and present, I thought the way the story unfolded was a truly engrossing whodunnit that managed to take me by surprise. Would definitely be interested in reading more about DCI Jonah Sheens and his team. (Anyone else shipping Ben + Juliette?)

Irene Steele’s idyllic life – house, husband, family – is shattered when she is woken up by a late-night phone call. Her beloved husband has been found dead, but before Irene can process this tragic news, she must confront the perplexing details of her husband’s death. He was found on St. John, a tropical island paradise far from their suburban life. Leaving the cold winter behind, Irene flies down to the beautiful Caribbean beaches of St. John only to make another shocking discovery: her husband had a secret second family.

As Irene investigates the mysterious circumstances of her husband’s death, she is plunged into a web of intrigue and deceit belied by the pristine white sand beaches of St. John.

MY REVIEW: Elin Hilderbrand is back with a new series that dives deep into the pool of secrets, lies and family betrayal. When Irene’s “perfect husband” dies and his secret double life is revealed her quest to find answers ultimately leads her to a new life she never dreamed of. I found Irene sympathetic as a character and really enjoyed the authenticity and rich details included about St John.

Beware– this one ends in a cliffhanger! Luckily by the time I read it, book 2 was out so I didn’t have to wait to find out what happens next!

What Happens in Paradise – Elin Hilderbrand

A year ago, Irene Steele had the shock of her life: her loving husband, father to their grown sons and successful businessman, was killed in a helicopter crash. But that wasn’t Irene’s only shattering news: he’d also been leading a double life on the island of St. John, where another woman loved him, too.

Now Irene and her sons are back on St. John, determined to learn the truth about the mysterious life — and death — of a man they thought they knew. Along the way, they’re about to learn some surprising truths about their own lives, and their futures.

MY REVIEW: Book 2 of Hildebrand’s Paradise trilogy picks up shortly after the ending of book 1 (Winter in Paradise) and finds the Steele family back home, dealing with the fallout from Russ’ shocking death. While it seems the book got mixed reviews from readers, I really enjoyed it! We delve deeper into the family dynamics and interpersonal relationships developed by the characters introduced in Winter in Paradise. This one ends with yet another doozy of a cliffhanger that really has me eager for book 3!

When America won the Revolutionary War, its people offered General George Washington a crown. Two and a half centuries later, the House of Washington still sits on the throne. Like most royal families, the Washingtons have an heir and a spare. A future monarch and a backup battery. Each child knows exactly what is expected of them. But these aren’t just any royals. They’re American.

As Princess Beatrice gets closer to becoming America’s first queen regnant, the duty she has embraced her entire life suddenly feels stifling. Nobody cares about the spare except when she’s breaking the rules, so Princess Samantha doesn’t care much about anything, either . . . except the one boy who is distinctly off-limits to her. And then there’s Samantha’s twin, Prince Jefferson. If he’d been born a generation earlier, he would have stood first in line for the throne, but the new laws of succession make him third. Most of America adores their devastatingly handsome prince . . . but two very different girls are vying to capture his heart.

The duty. The intrigue. The Crown. New York Times bestselling author Katharine McGee imagines an alternate version of the modern world, one where the glittering age of monarchies has not yet faded–and where love is still powerful enough to change the course of history.

MY REVIEW: I mean… I’m basically obsessed with Katharine McGee. I’ve shared before about my absolute love for her other series, The Thousandth Floor. Her new series is a romantic, engrossing read imagining an alternate history for the US– one where George Washington became king of the United States instead of president. It has everything I expect from a Katharine McGee book– drama, romance, forbidden love, secrets, lies… I loved the royalty aspect and a lot of it felt kind of like one of my other fave YA series The Selection. This is a light, soapy read that you won’t be able to put down! I can’t WAIT for book 2 to drop later this year! 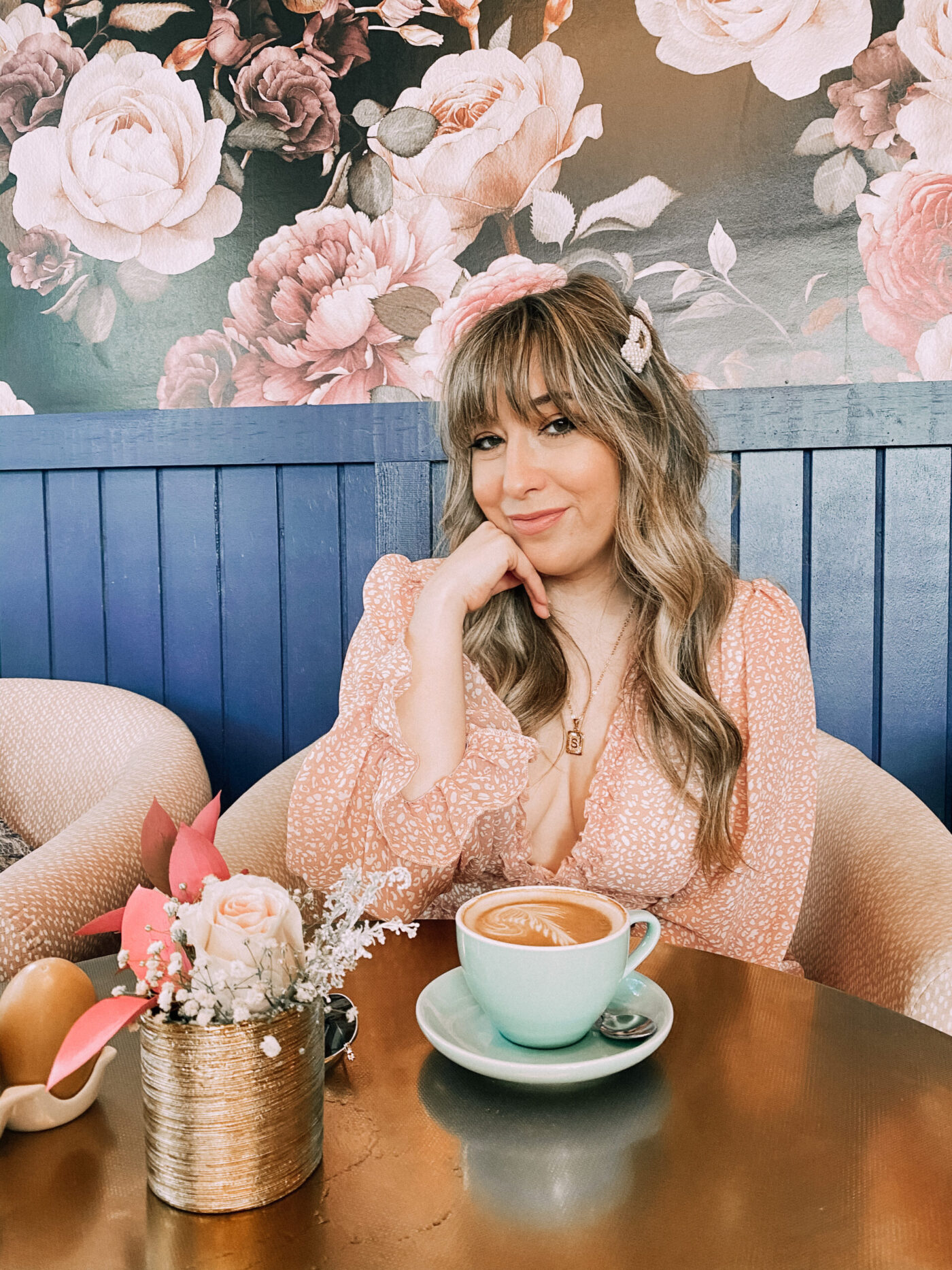 If you saw us crying at @ardsley_station, no you d

Things to Do in Savannah: stop by @theparismarket

Pro tip: treating yourself to a cute new set will